September: get ready for next spring 🌱

Making a barrier to stop slugs and snails

Everyone with a vegetable garden will agree: we don't need any more slugs or snails. We want less. Or none at all.

This page is all about the different types of barriers designed to stop slugs and snails in their tracks. What works and what doesn't?

In the last couple of articles, I covered:

Sure, I would sacrifice some cabbage leaves if it would keep slugs and snails away from my lettuce.

But what do you do with plants that they like even more than cabbage? Or when your garden is the target of a real snail infestation?

Secure the perimeter and set up a barrier

A barrier should prevent slugs and snails from getting near your plants. Then you don't have to worry and don't have to think about them anymore.

But my garden is in a true snail zone. Snails and slugs are everywhere. Almost nothing helps, except our own slug fence:
Slug and snail fence
NB! - Unfortunately, the slug fence is sold out.

A lot of people found the assembly too complicated, so we're improving the design and working on a new version.

The process has turned out to be a bit more challenging than we thought, so it'll be a while before we can offer it in the shop: end of 2021 at the earliest.

Sorry about that. As much as we'd like to, we can't speed things up. We are working hard to make the best slug fence we can.
But before the fence, I tried all kinds of things:

I'd heard that you can make a natural barrier from eggshells:
It didn't work 🤨

You can protect some fragile seedlings with plastic containers:
Since slugs and snails have trouble with the smooth side of the plastic, this can help with young kale, sunflower, or lettuce plants. Especially if you use Tieke's tip:

"I put small plastic containers around each seedling. (I cut off the bottom first.) Then I spread a ring of vaseline 10 cm wide along the outside of the container. The vaseline makes it even harder for the slugs to climb. So they fall off or give up."

Unfortunately, it doesn't work for all slugs:

So, sometimes people send me things to try out. That's one of the perks of the job 😉

In 2014, I got a type of netting that's supposed to keep out slugs and snails. Of course we tested it. We tried it on my aunt's plants, because the slugs seemed to like her garden boxes best:
An excellent test case.

Materials we used: the plastic mesh netting, some stakes, scissors, screws, and a screwdriver.
We secured the wire netting to the garden box with the stakes.

Then we covered the edges of the netting with dirt or wood chips to weigh it down, so the slugs couldn't crawl underneath:
We then folded the top down over the stakes.

It was impossible for slugs to get over this obstacle. They crawled up it, but then couldn't go any further.
But it's a bit of a hassle. And it looks pretty ugly to me. But it works. I didn't find a snail in that garden box the whole year. My aunt was really happy. And, by the way, a strip of plastic works just as well as the netting.

So, that's one option.

I thought about putting a barrier like this around my entire garden. But how do you mow the grass? Or wheelbarrow over it? You can't really.

So, you'd think that an L-profile in the corners of the garden box would work too. The theory is: if a snail has to climb up the garden box, then crawl horizontally, and then go down again, it will lose its way.
We tested it and it helped. For a little while. After that, they just climbed over it.

In 2015, a brush manufacturer came out with a prickly barrier: a snail brush. When a reader tipped me off, I immediately wanted to try it.

It came with 5 long, flexible brushes of 1 meter each that you can easily attach to each other. I stapled them to the edge of one of my garden boxes:
The brush had to fit snuggly. If there had been just one space for slugs to crawl under, they would have done it. And that would defeat the whole purpose.

Testing out the prickly barrier

I went on the hunt and found the perfect volunteer in no time.

It only took a moment for the snail to smell something good and climb up:
After a few unsuccessful attempts, the snail crawled a little farther - looking for an opening - but that didn't last very long:
Hooray, it seems to work! Again, not the prettiest option, but chewed-up plants aren't so nice to look at either.

Wait a second. Too soon?

Well, the celebration didn't last long. I'd barely shared my experience online when disappointed users started sharing theirs:
(Thanks to Johan and Jan for the revealing pictures)

And later, this was my bean box in 2018:
So, it looks like the brush barrier keeps out snails. But not slugs.

Some people swear by copper tape.

The more I read, the less hopeful I felt.

But still: I got enough enthusiastic emails, I decided to try it. I stuck a roll of copper tape along the sides of one of my garden boxes. It had a pumpkin plant in it that slugs had attacked before.

One rainy night later, this is what I saw:
"Wait Jelle, that could be a slug that was already in the garden box before you added the copper tape."

Okay, sure. But then we did a test. There were plenty of slugs around. So, I stuck a few on the side of the garden box, below the copper tape. I used a munched-up leaf as bait. Then I waited.

Most of the slugs were too full and just sat there.

But the 2 biggest - a snail and slug - soon were on the move:
See? The slug had no problem climbing right over it:
But snails seem to be more sensitive: that one turned around right away.

In the US, Bob Kelland made this film about copper tape and other materials:
The big winner from Bob's test? Electrified wires.

That sounds heavy but it's not so bad. And it works well. It's just like an electric cow fence: the slugs get scared and turn around.
We used this principle to develop our own slug and snail fence.

But to stop all slugs and snails - both big and tiny - we use 4 wires instead of 2:
Why and how did we make our fence?
Our slug and snail fence
Okay, so that's everything I can tell you about barriers to keep out slugs and snails.

Sounds rough, but many experts say it doesn't have to be. 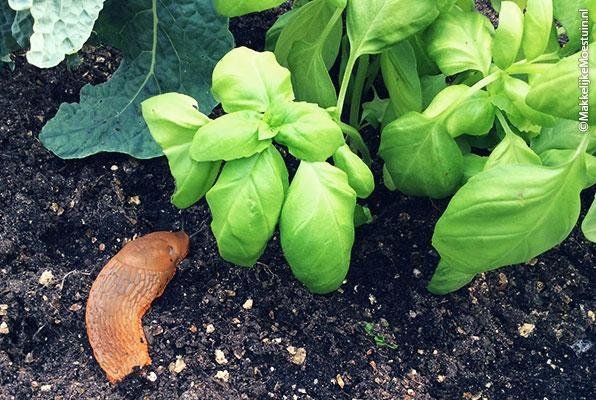 How to kill slugs and snails

So. You're so fed up with slugs and snails in your garden that you want to kill them. How do you do that responsibly? Here's what works and what doesn't.